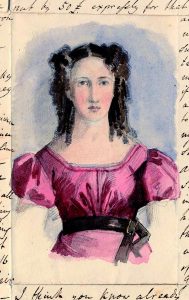 With her chestnut ringlets and claret coloured puffed sleeved dress, Constantia von Holst looks every inch the Regency belle in this almost incidental portrait. Sitting amidst a flurry of inked lines in a letter to her parents, this seemingly slight watercolour sketch was painted by Constantia’s brother, the proto Pre-Raphaelite, Theodor von Holst (1810-1844). It is one of several letters associated with the artist in the museum’s collection, although with its intimate glimpse of Gustav Holst’s great-aunt, it is arguably the most exquisite. Not only because of the evocative details of Constantia’s dress and hairstyle, suggestive of a Bronte heroine from the pages of the 1820s-set The Tenant of Wildfell Hall, but because of the skill with which Theodor has so delicately rendered her features, imbuing them with character and individuality. For Constantia’s face draws you into the page, encourages you to wonder about her, makes you look upon her long nose (so very like Gustav Holst’s!), her wide brown eyes and the pink blush of her cheeks.

The watercolour is one of two known portraits of Constantia, although she also appears as a model for her brother in a variety of works. However this image is the only one which appears with her thoughts. For scribbled alongside the remarks of her brothers are her excited lines, revealing the desires of a young woman on the cusp of entering the adult stage. After being somewhat apologetic about her portrait being included in the letter: ‘…not from any vanity – no – only that you may not entirely forget your affectionate Constantia’, she goes on to almost giddily express her wish for a creative life:

‘I pass my time as well as I can, in practising singing, for I will tell you candidly my hope and intentions if they are frivolous, and not according to your wishes then tell me that I may give the up whatever you think pray in your next don’t forget to mention…I think I improve in singing and by the time you come back to sing much better, then if I was apprenticed to a singing master, for a year – and come out as an actress or singer that I might gain money – what pleasure it would be!’

It certainly appears that Constantia shared the Holst family interest in the arts and clearly possessed some musical talent. But there is no indication that she did in the end embark upon a singing or acting career. What is known is that in 1833 she married a Frenchman, Jean Furcy Tourrier, a Professor of Languages. The couple had four children, one of whom, Juliette, died at the age of ten. Rather poignantly, Constantia’s obvious closeness to her brothers so evident in their joint letter is also clear in the names of her two sons: Gustavus and Theodore. It is especially touching that her artist brother died two years before her son Theodore was born.