Could this Victorian soap saver be due a revival in today’s kitchens? 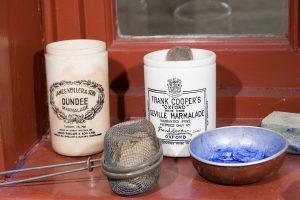 What did you do with your last slivers of soap? Used them until they were truly transparent and as slim as a pin? Threw them away, believing it to be far too much effort to squeeze the last suds from such scraps? Perhaps you popped these waxy splinters into a soap saver – that common Victorian contraption frequently found on scullery windowsills? Or maybe you don’t have soap disintegrating by your sink? After all, liquid soap in plastic dispensers has become increasingly fashionable and common place in our homes these days. And the days of using soap for laundry are long gone – replaced by colourful boxes of flakes and power.

However if you were living in the mid 19th century you would almost certainly have opened your soap saver and dropped in odd scraps of green and red carbolic.  In the scullery at the Holst Birthplace Museum we have one of these useful metal gadgets, complete with some dusty soap portions. At first glance it looks more like something you would find in the kitchen (Victorians always kept their washing and cooking areas separate if they could), perhaps for containing tea leaves. Nevertheless this item is actually a very helpful device for the frugal mistress of the house. Its design is simple: a round wire mesh ‘basket’ for the soap which could be opened by squeezing the handle. Some soap savers were designed with a rectangular basket, together with a sliding clasp which allowed you to easily open and close it.

So why bother saving soap? Certainly the lack of soap savers in our homes today reflects the changing attitudes towards waste and recycling. The Victorians had a culture of reusing everything whether it was potato peelings for the pig man or tea leaves to clean carpets. These fragments of soap, usually from bars specific for clothes washing, could be swirled in the saver in the dolly tub on ‘Blue Monday’ – the day set aside for cleaning clothes.

Maybe the soap saver is due a revival? They seem a great way to store such fragments for another day, thereby reducing waste. Of course the fact that soap now comes in many different forms means that a soap bar might not habitually be on our shopping list. The reason the bar was so universal in Victorian homes was because it was used for both personal and household use. Perfumed bars would be reserved for cleansing the body, while green and red carbolic would be used for washing clothes, cleaning dishes and general household chores.  Indeed carbolic soap was familiar in homes until at least the 1970s. Its disappearance from our interiors was connected to the launch of amongst other products, Fairy Liquid in 1950 (followed by its competitors), and then in the 1980s the mass manufacture of liquid soap in pump action dispensers.

So perhaps after all – its function now redundant – the humble soap saver would struggle for space in our kitchens today? In fact if we were to make room for it, it would be as a quirky kitchen prop, included to provide a sprinkle of vintage Victoriana, alongside that other survivor of a bygone age – the Belfast sink.