What were these small mangles used for in Victorian times? Find out here!

by Paul, a volunteer. 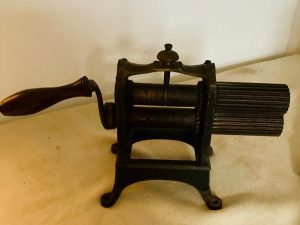 After knife cleaners, my favourite object(s) are the small mangles in the scullery. While researching knife cleaners, I bought a small hand knife cleaner on eBay. A week or two later another ‘knife cleaner’ was offered for sale so I purchased that as well. However, it turned out to be a small mangle!  I ‘phoned the vendor who had not known what it was! It is similar to those in the museum but has a piece on one end, the purpose of which is not obvious (to me at least). It has a bowl underneath, presumably to collect water, but what squeezed the water out? Is there a piece missing perhaps? If anyone knows, please get in touch.

Here is my small Victorian mangle. The screws on the top adjust the gap between the two rollers which are driven by the gear train on the right. At the same time the piece sticking out to the left rotates and, presumably, collects water in the semi-circular bowl underneath.

Why did the Victorians need a mangle like this? These days washing machines have a spin cycle to remove the water from the clothes but back in Victorian times it was squeezed out by feeding the clothes between a pair of contra-rotating rollers. The rollers could be adjusted to cope with fabrics of various thickness and they were hand operated by turning a handle. But why a small mangle? Well, the larger mangles were fine for sheets, pillowcases etc. but men, in particular, wore shirts with detachable collars and cuffs. These were attached to the shirt using studs and were treated with starch to make them stiff. These small mangles were used when laundering such small items.  Here’s a picture of a Victorian collar: 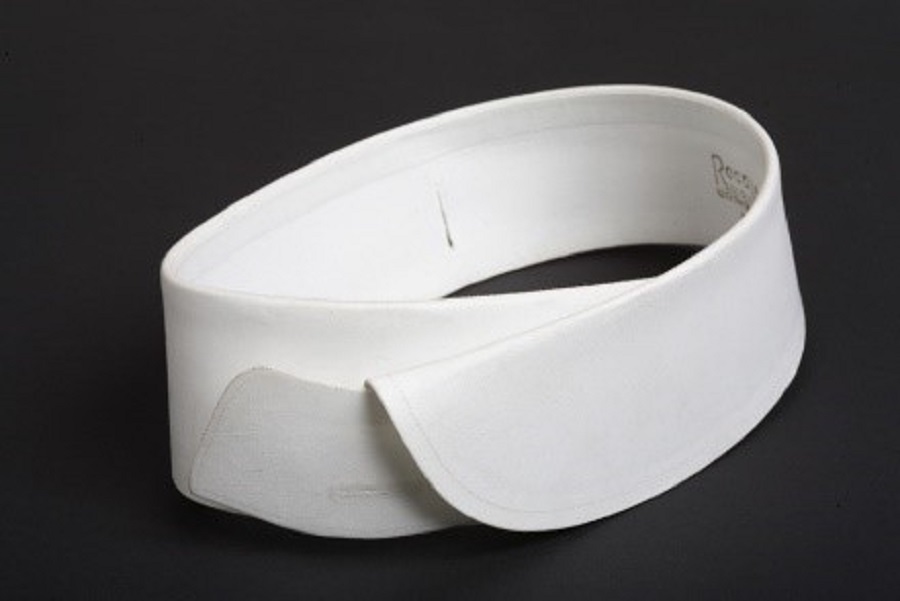 The collection in the Museum contains several examples of small mangles some of which, I believe, were specifically used for lace and other delicate fabrics. I am really looking forward to the museum opening again so that I can spend some time looking at them more closely. Detailed information is not easy to come by. Googling ‘small Victorian mangles’ and similar searches only seem to return information on the larger mangles. Maybe the smaller ones were less common because you could always put shirt collars and cuffs and lace through a suitably adjusted large mangle.