Punch and Judy on a die cast scrap of paper, 19th century 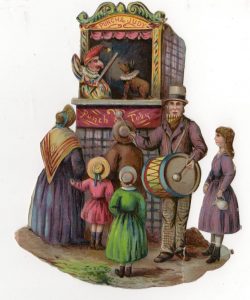 This year will be a quieter Christmas for many of us. Fewer places at the table steaming with turkey, not so many crackers to pull…But perhaps one of the things we will really miss over the festive period is the annual visit to a pantomime or carol concert. Surely Christmas isn’t Christmas without the strains of In the Bleak Midwinter heard in a cool, stone church, or the yelps of dames in polka-dot hooped crinolines?

Live performance and entertainments in the home were also central to a Victorian Christmas, be that a play at the local theatre or parlour games such as ‘Blind Man’s Buff’ (as recollected by Scrooge in Dickens’ A Christmas Carol). If you were particularly lucky you might have experienced a Punch and Judy puppet show, either in the street or in a private home – at Christmas time the ‘Professor’ or ‘Punchman’ often brought his brightly coloured booth into the drawing rooms of the middle classes for families to enjoy.

In the current exhibition ‘A Victorian Childhood’ at the Holst Birthplace Museum, we have on display a Victorian scrap showing Punch and Toby the Dog performing to a group in the street. This is just the type of show the Victorians would have experienced around Christmas time.  In the scrap, a man known as a ‘Bottler’ can be seen with a drum at the front of the Punch and Judy booth. The Bottler’s job was to help the Professor gather an audience for the show, as well as play music and collect the money. The Bottler is not so well known today, most performances operating with just the Professor.

The 19th century Punch developed from a stringed marionette puppet to a glove puppet operated inside a portable painted booth. Punch has always been an ambiguous character, with people drawing attention to the violence in the plays even in the 19th century. One of the most notorious plays involves Punch attacking Judy and his baby son and then turning him into sausages!

The scrap itself would have been collected and assembled in an album or used to decorate a card or box. Paper scraps were particularly popular from the mid 19th century onwards, propelled by the advances in colour lithography and machines for die-cutting – essentially the punching out of intricate shapes without the need for laborious hand cutting.

For now, this two dimensional image of Punch is the closest we will get to experiencing a Punch and Judy show. But perhaps, next year, we will hear once more Punch’s nasal refrain: ‘That’s the way to do it!’