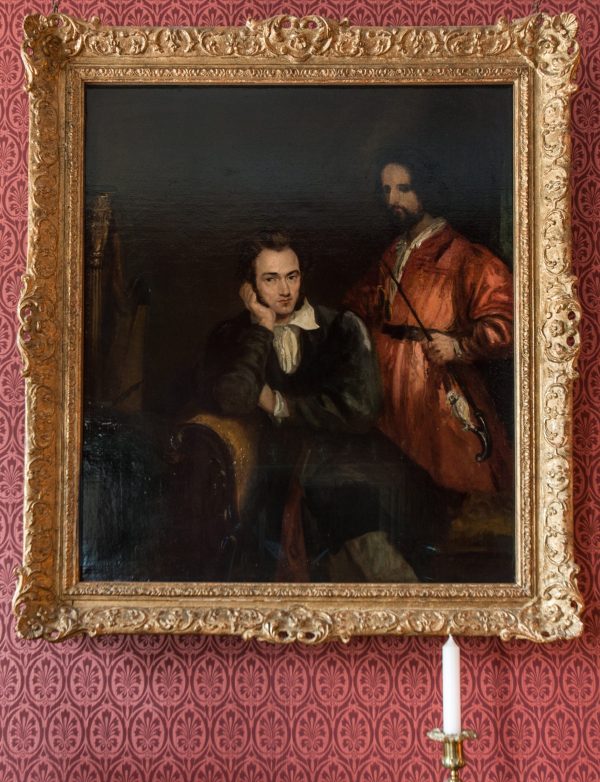 This is the finest of the Holst family portraits painted by Theodor von Holst (1810-44), a noted Gothic-Romantic painter, who trained at the Royal Academy and was an important influence on Dante Gabriel Rossetti. The portrait shows Theodor with his brother Gustavus (1799-1870) at the time of Gustavus’ first visits to Cheltenham to teach music.  Gustavus von Holst was the first ‘Cheltenham’ Holst and grandfather to the composer Gustav. Gustavus is looking directly at us, his gaze direct, almost confrontational. He is depicted as a cultured man with a harp and quill in the background.  Gustavus added ‘von’ to his name, possibly to attract pupils, as German musicians were highly regarded at this time.

It is likely that this portrait – alongside the other family portraits on display in the museum – was hung in the house when the Holst family lived there in the 1870s. The portrait was donated to Cheltenham Art Gallery & Museum by Imogen Holst and had passed to her from her father. The portrait can be seen in photographs of Gustav Holst’s Thaxted home in the 1920s.

Gustavus began his life as a Baltic German in Latvia and ended his life in Cheltenham, having become a naturalized British citizen. He was born in 1799 in Riga, Latvia, then part of the Russian Empire. His parents were Matthias Holst and Katherina Rogge. Matthias was a musician at the Imperial Russian Court. The Holst family were Baltic Germans as opposed to native Latvians, the latter being known as the ‘undeutsche’ (non-Germans). The Baltic Germans were the dominant group in Riga and made up the middle and upper classes. As a child Gustavus would have been brought up to speak German and to think of himself as culturally German.

Around 1805 Gustavus and his family left Eastern Europe for England, probably for political and economic reasons, but also perhaps for musical ones. Matthias soon became an established teacher and composer in London, composing for theatre and also having his sheet music published.  Gustavus followed his father into teaching and composing. Initially he taught in London and the south-east, but from the 1830s he began coming to Cheltenham for the season.

In 1833 Gustavus announced in the Cheltenham Chronicle and the Cheltenham Journal that he intended to stay in the town for the autumn to teach music. He described himself as ‘the celebrated Harpist’ and as ‘offering harp lessons in the town and neighbourhood.’

By the 1850s he had settled in the town permanently with his family. In 1853 Gustavus was employed at The Ladies College as Professor of Music, a post he held until 1855, after which he was employed on a freelance basis.  His acceptance letter for the post is now in the Ladies’ College archives, written from 5 Queen’s Circus (now The Circus Bar).  He states that he is willing to ‘…give a whole day in each week for the purpose of superintending one half of the pupils harp lessons of the pupils at the Cheltenham Ladies College, at the terms by the committee.’ He describes in the letter how he is able to supply ‘first rate’ instruments (pianofortes etc) for purchase ‘which can be seen at my residence here where I have several.’

In the 1861 census we find the family living at 16 Rotunda Terrace. In the census he still listed himself as ‘Professor of Music, Harp and Piano Forte.’ His birthplace is listed as ‘Russia’, although he was a ‘Naturalised British Subject.’ All of Gustavus’ children, Adolph, Matthias, Lorenz, Kate and Nina, became musicians, teaching and performing in Cheltenham.

Theodor, like his brother, also added the von to his name, something that was never used by their father.  Apart from being an artist, Theodor was also an accomplished musician and writes of playing the harp whilst in a visit to his brother Gustavus, in a letter to his family. Similarly to his brother, Theodor cultivated a specific identity. A contributor to the People’s Journal, in 1847, vividly describes a visit to Holst’s studio some twenty years earlier:

“Even at that age he was a confirmed smoker. The youth himself, too, seemed to belong to a by-gone age, being clad in a kirtle of grey cloth reaching to the knee, confined at the waist by a leathern girdle, his dark waving hair falling low on his shoulders, and his lip slightly shaded by a moustache.”   Such medievalism, so prevalent in German and English Romanticism, was a lifelong feature of Holst’s life and art and can be seen in almost all his self-portraits. Theodor died in 1844 before he was able to establish himself fully and enjoy artistic success.