From the ‘toy centre of the world’!  By Kirsty, a volunteer. 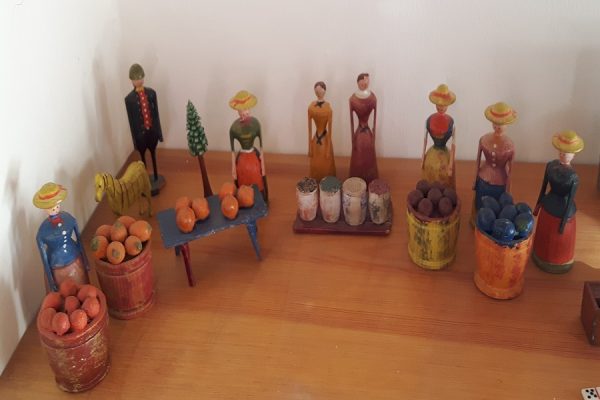 Today’s object of the week is actually quite a lot of little objects, and they are ones that I would have absolutely loved as a little girl – as I do now, because I love going to markets! These brightly painted wooden market stalls, traders and produce come from ‘the toy centre of the world’ in the 19th century – Germany. The main centres for toy making were Thuringia, Erzgebirge on the Czech border and Nürnberg. Even in the late 70s I remember getting little bags of German wooden houses and trees and delighting in them. Back in the 19th century, you could order toys like these from special catalogues. Often the toys were a lot more sophisticated than these ones, using little crank handles to make the toys move – such as a mother bird feeding her chicks, a soldier beating a drum, or two women churning butter, or with little leather bellows to make the toys quack or squeak.

Although today a lot of the wooden toys made in Germany are for the Christmas market, nutcrackers and angels and Santa Claus, the subjects of these earlier toys were usually everyday things – or toy soldiers, of course. This set is of a group of behatted women selling what looks like fruit or vegetables from large wicker baskets. They look just like depictions of market traders in Germany at the end of the 19th century, with their straw hats and brightly coloured clothes, and a slightly different set that includes the other two women and probably the man, selling something from smaller tubs. They may well have been part of larger sets with people selling plants and livestock, so the child could potentially acquire the set slowly in little sets ordered from the catalogues or a toy shop that stocked them.

The tree, with its curly leaves, is typical of the wooden trees made in the Erzgebirge area of Germany near the Czech border. This area started selling toys in the very late 17th century, but in the 18th and 19th centuries, after the silver mines in the mountains became unprofitable, it became a major source of income for the people who lived there. Entire families would make the toys in the cold winter months. It isn’t as idyllic as it sounds – imagine working 12 hours a day in poor light levels. Child labour was common, and the prices the makers received for their pieces was low, even though when the toys were finally sold from the toy markets in Nürnberg, they were quite expensive, and could be shipped all over the world. There had been a toy industry in Nürnberg since the late Middle Ages and the largest international toy trade fair still takes place there. Today, wooden toy making is centred in Seiffen in the Ore Mountains, and it’s where you might get your German nutcrackers and angels for Christmas. A German friend of mine always gets out her angel choir at Christmas!

However, I think that a member of a Noah’s ark has snuck into the market, too – that horse looks rather like a little zebra!