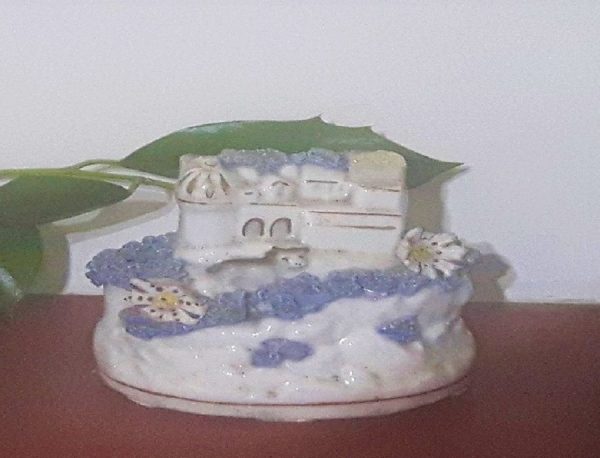 Today’s Object of the Week, chosen by volunteer Kirsty, is a probably a pastille burner – in other words, it’s a Victorian air freshener. This one in the Housekeeper’s Room is in the shape of a little walled hillside village with greenery below and what I take to be a rather out of proportion cow!

Pastille burners were originally only found in wealthy homes. In the 16th century, they were usually made of silver. A pastille is either a lozenge or sweet – think Rowntree’s Fruit Pastilles – or a medicinal pill. In this case, the pill was not made to be sucked, but burnt, like incense, to give a pleasant scent to a room. They were originally made at home, of charcoal – usually from willow – saltpetre (potassium nitrate), something to bind it like gum arabic, and a fragrance like lavender, rose or sandalwood. By the Victorian period, however, they were being mass produced – as were the holders.

The idea of a pastille burner being a little building or collection of buildings goes back to the 18th century, when the wealthy would sometimes commission porcelain copies of buildings on their estates to create the pastille burner. By the early 19th century they were often being made to look like picturesque little cottages – all spindly verandas and roses around the door. Why? Because, in the early 19th century, as now, a cottage in the country was considered a healthful place to be! And country air was, then as now, considered to be good for you. Many of us have been continuing this idea through the lockdown, with our walks for exercise in the best green spaces we can find.

The pastille burners, which had been made of costly porcelain in the 18th century, were now made cheaply in the Staffordshire potteries and sold cheaply, too. Anyone could have one of these fanciful little ceramic pieces. Not just cottages, but palaces, little exotic scenes like this one, churches – and often surrounded by flowers and greenery. The pastille would be inserted at the back of the piece, or sometimes the top would lift off. We can imagine the housekeeper in her room in the basement using a pastille to ward away the smells of cooking and laundry in her sitting room as she looked through recipe books for the week’s meals, made lists of tasks for the other servants, did the accounts and contemplated what groceries she needed to buy. Or maybe she didn’t even burn a pastille, because, as the 19th century progressed, people burnt pastilles less – but they still bought the little cottages, simply because they liked the way they looked. And why not?