Longing for the seaside? Feast your eyes on this Crown Derby shell vase from 1810-20. 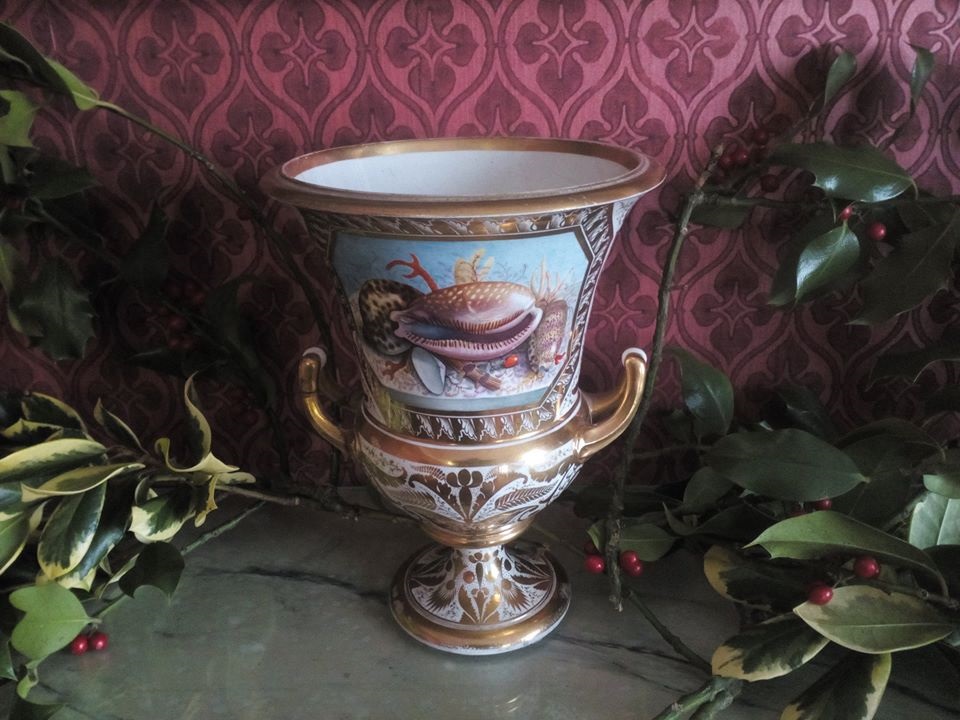 After the storms, summer feels like it might be drawing to a close. Blackberries are ripe, the haws are turning red, the harvest is in (hopefully!) and there are seeds and spores everywhere. But there are still two weeks of August left! Despite all the disruptions to life this year, the seaside still has its lure. I don’t know about you, but I love collecting shells and stones from beaches, and have quite a few around the house to remind me of beach holidays gone by. It’s interesting that, at exactly the same time that the seaside began to be popular, images of shells, often beautifully painted, started appearing on porcelain. These pieces weren’t souvenirs, like the shell picture in the Maid’s Room I featured earlier in the summer, but rather high quality objets d’art for the best rooms in the house.

This vase, one of a set of three, lives in the Regency Room on the mantelpiece. It’s in white soft paste porcelain, and was made at the porcelain factory in Derby between about 1800 and 1820. It combines the fashion for classical art with a fashion for highly naturalistic and scientifically correct paintings of nature. The early 19th century saw advances in the scientific understanding of the world around us, and a concerted effort was being made by naturalists and geologists to classify all of nature, from the rocks beneath our feet to the (shell)fish in the sea. At the same time that they were coming to understand some of the relationships between living animals and plants, palaeontologists were starting to unravel prehistoric ‘deep time’, with discoveries of fossils, including dinosaurs and marine reptiles – but also shells. There was a whole discipline related to shell classification and collecting: ‘conchology’. In the early 19th century, new books were coming out, explaining the taxonomy of the mollusca by travellers and scientists like John Mawe, and the Sowerby family.

The shells were almost certainly not painted from life. The artists would have had books with paintings and, increasingly, colour prints from which to copy. These designs were available to ordinary people as well, for example, The Cabinet of Arts: Being a New and Universal Drawing Book Forming a Complete System of Drawing by J. Dougall and produced by R. Ackermann, a prominent publisher and print seller. This 1821 volume featured images of shells that are depicted in a way almost identical to those on the vase, with sprays of seaweed behind them. Our vase features one of the most popular types of shells, the cowrie – certainly not a native shell!

The rest of the vase is a conventional classical urn shape, with gilded decoration, designed to fit in with the fashion for classical art and design in the Regency period. It was produced by the Crown Derby, who had a team of very fine painters in the late 18th and early 19th centuries – if you didn’t want shells on your vase, you could get similar pieces with Romantic landscapes, sometimes named locations, particularly in Derbyshire, another popular place to visit at the time. Remember, Lizzy visits Derbyshire in Pride and Prejudice, and that’s where she discovers Pemberley and a softer side to Mr Darcy! You could also get exotic birds, luxuriant flowers or designs inspired by the porcelain of China and Japan. What would you choose? I think, given how much I have missed the sea this year, I would choose shells!