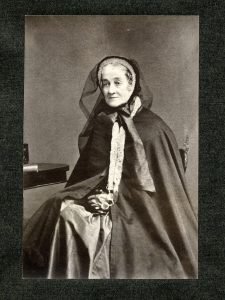 They’re often no bigger than a postcard, but carte-de-visites, small, mounted, visiting-card sized photographs, can reveal so much about our Victorian forbears. These tiny documents, still shining 150 years later with their fixative slick of albumen (egg-white), show us how fashionable (or not) the subject’s dress was, what hairstyle they favoured and what props (if any) they chose from the studio stores.

In this photograph, taken from a carte-de-visite, Mary Lediard (1806-1895), Gustav Holst’s grandmother is depicted in mourning. We can therefore date it to around 1852 when her husband Samuel died. The rules for who wore what and for how long after a relative died were complicated. However, household manuals such as The Queen and Cassell’s offered some guidance on appropriate mourning etiquette. From the photograph it appears that Mary Lediard is in full mourning as she is dressed entirely in black and is wearing a mourning veil, traditionally made from two layers of crape six foot in length, dyed black and fastened onto a bonnet placed at the back of the head.

Widows like Mary were expected to mourn their husbands for two years, proceeding through three individual stages: deep mourning, full or second mourning, and half-mourning — each with its fashion requirements and restrictions on behaviour. Deep mourning lasted a year and a day and required a widow to wear simple black dresses and don a full-length black veil anytime she left the house. Unfortunately these veils, due to the dyes and chemicals used to process the fabric, could at the very least dye the skin and cause skin irritation; at their worst, they caused respiratory illness, blindness, and even death.

“Many a woman has been laid in her coffin by the wearing of crape,” wrote a doctor in 1898 and in The Delineator in 1895 a writer bemoaned, “The eyes that survive the bitterness of tears succumb to the poisonous rasping of crape’. Indeed it is cruelly ironic that clothes worn for mourning could lead to illness and death.

The image of Mary in her austere outfit might suggest she was a remote figure in Gustav Holst’s childhood. On the contrary, it seems that she played a role, later welcoming him to her house in Cowley, Oxford when he went to study counterpoint.

Mary was originally born in Cirencester, her father David Whatley a solicitor and her mother Henrietta Ambrose, herself a daughter of an Irish actress. She was known as “Pretty Mary Whatley,” in her childhood, marrying Samuel Lediard, a local solicitor when she was 20 years old. They had nine children in steady succession from 1830 to 1847. She was blessed with a strong constitution, for she survived to the age of 89, outliving her husband (by over 40 years) and four of her children.

Following Samuel’s death she lived at Buckholt Cottage, Cranham, between Stroud and Cheltenham, and then from the 1860s, she moved to Cheltenham. Her family had owned 4 Pittville Terrace from at least 1845, but they didn’t live there permanently until 1871. When his daughter Clara married Adolph von Holst in 1871 she continued to live there with her daughter Susan. She left in 1874 when Clara became pregnant with Gustav, allowing the young family to make their home there.

Settling in Cowley she kept up a prolific correspondence with her friends and family, and among the extracts which her son Henry preserved was her only surviving reference, in a letter of September 1889, to the grandson who became so well known in later life: “Gustav is here for a few days, he seems to be an intelligent boy, his great musical talent will I suppose be his profession in life.”

Previous Post
Recitals on Holst’s Piano: Adam Heron
Next Post
Schools visits are back on at Holst Victorian House