At this time of the year, the Holst Victorian House festoons its rooms with holly, ivy and mistletoe. 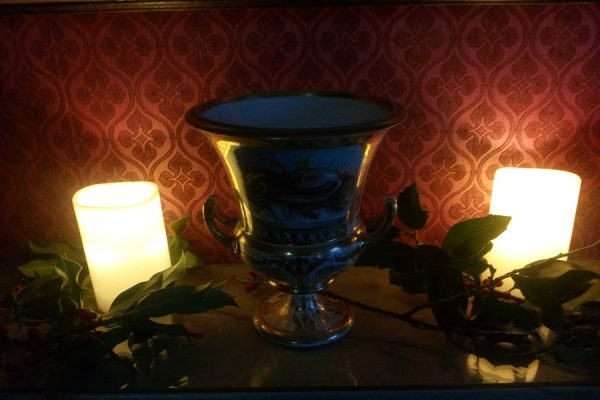 Usually at this time of the year, the Holst Birthplace Museum festoons its rooms with holly, ivy and mistletoe in full Victorian style! Sadly we will have to wait until Christmas 2021 to decorate the rooms once more with evergreens. Holly was particularly popular with Victorians at Christmas as a festive decoration. Indeed holly has a rich heritage of being used in the home, with the tradition going back many centuries with its roots in the pre-Christian period. Some people in the past believed that hanging holly around the door would protect a house from malevolent spirits. At the museum we use holly to create wreaths, to decorate mantelpieces and fireplaces, and also for weaving with other native plants to embellish the banisters. The Victorians published ideas and tips about how to use holly decoratively in their many household books and magazines. In the 1861 edition of her Book of Household Management, Mrs Beeton details how holly can be glazed with sugar to create festive ornamental garnish for the table:

To Frost Holly Leaves, for garnishing and decorating Dessert and Supper Dishes

Mode – Procure some nice sprigs of holly; pick the leaves from the stalks, and wipe them with a clean cloth free from all moisture; then place them on a dish near the fire, to get thoroughly dry, but not too near to shrivel the leaves; dip them into oiled butter, sprinkle over some coarsely-powdered sugar, and dry them before the fire. They should be kept in a dry place, as the least damp would spoil their appearance.

Time – About 10 minutes to dry before the fire.

Seasonable – These may be made at any time; but are more suitable for winter garnishes, when fresh flowers are not easily obtained.

It is interesting to note that Mrs Beeton mentions the scarcity of fresh flowers in winter time. This is something that we don’t think about in the 21st century, so used are we to the availability of cut flowers all the year round, flown in from exotic climes. This comment offers a clue as to why this glossy evergreen with its bright red berries became so popular for decoration in the cold, dark months.

Cassells Book of the Household, published in the 1880s, offers more ideas for using evergreens such as holly in the home. In the chapter on Christmas Decorations it describes how the holly is the most ‘sacred’ Christmas evergreen, ‘with its dark, shiny, prickly leaves, and in some years its wealth of scarlet berries.’  It goes on to say that quantities are grown in Kent for ‘the London market’ and also in the ‘Midland Counties.’ Cut holly was certainly a commodity in 19th century Britain. As Cassells mentions, the holly tree doesn’t offer a consistent crop of bright red berries every year, so for those with a disappointing yield Cassells has some useful advice: ‘Often, however, it is necessary to have recourse to artificial berries, which can be bought by the gross or spray from artificial flower-makers, or “all-sorts” shops…Each berry, when single, is mounted on a short length of green-covered wire, by which it can be easily twisted into place.’

Perhaps this year, with many of us reportedly putting more effort into our Christmas decorations because of Covid, we should consider using holly more extensively (perhaps instead of the less environmentally friendly plastic tinsel)? With its vivid berries it the ideal adornment for shelves and windowsills, brightening up our homes in these difficult days.